The search for this year’s best Northampton burgers continues with a contestant who made an appearance in our 2014 search – the Charles Bradlaugh. Located a short distance from the Northampton town centre, the Charles Bradlaugh is a converted shoe factory that always has an array of different and interesting events on, from Jazz & Blues nights to their rather infamous Madame Electrifie, electro-swing night.

With their friendly crowd, cool setting and awesome events, we had high expectations back in 2014. Our expectations unfortunately were no where near met and the gent team was left bitterly disappointed. It was with this memory that we returned just over a year on to discover if the pub had managed to turn over a new leaf and serve up a 5 star contender. 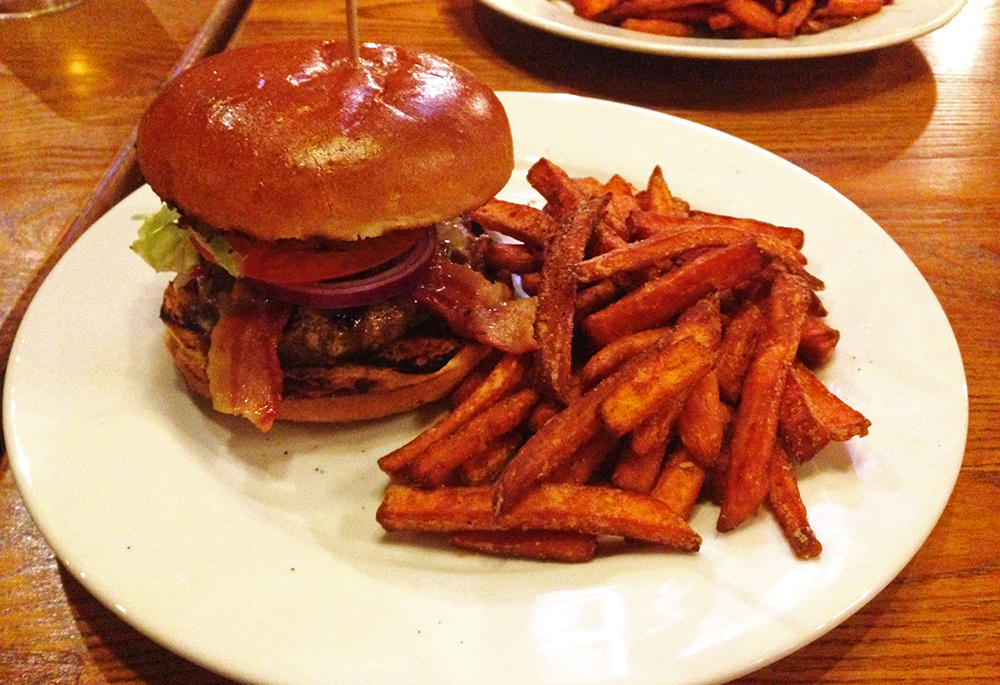 The first thing we noticed was that the pub had completely changed their menu and has now set up the ‘Bradlaugh Burger Kitchen’. It was not just the menu that had changed, with a new team toiling away in the kitchen and a new head chef leading the proceedings. After a fleeting perusal of the menu, it became quickly apparent that the burger we were going to have to try was ‘The Gentlemen’. Taken in by the prospect of a classic flavour combination of cheese and wine with the stilton and port relish, we were attempting to try and not get our expectations too high in case of a 2014 repeat.

It seems our fear and trepidation was unnecessary. The new team have been able to completely transform the Bradlaugh’s burger offer and it was hard to believe that this was the same establishment that served us 2014’s lowly burger. The soft and juicy homemade beef patty was wonderfully seasoned, enhancing the rich, beefy flavour of the meat which was the true star of the show. Quite literally oozing with flavour, the first bite gave immediate gratification. The streaky bacon – whilst not quite as crispy as we would have hoped – added a lovely, salty element whilst the salad was refreshing and fresh enough to ensure that the lettuce and red onion providing a necessary crunch. The toasted buns were able to contain the juicy meat without losing their form whilst still remaining fluffy on top so as not to distract from the real show in-between them.

The stilton is a powerful flavour in the burger mix – something we are always concerned with as it has the potential to spoil that all important burger balance. Fortunately the stilton used was on the milder end of the spectrum, allowing the delicious beef to take centre stage but still being strong enough to make its presence known. The only element that let the burger down was the sweet onion and port relish which we struggled to taste through the stilton and beef. Having hoped the sweetness of the port juxtaposed with the somewhat sharp elements of the stilton might lead to a rather unique flavour combination, we were left slightly disappointed that the relish did not shine through.

Having finished our burgers, we had to quickly check the front of the pub to make sure we were in the correct establishment. The new team have excelled in their ability to create a tasty and delicious burger and the burger experience was a wholly enjoyable one. The flavoursome patty was tender and stood out as the key components, whilst the accompanying bacon, cheese and salad worked well to produce a well balanced and delectable burger. The sweet potato fries were just slightly overdone and a tad too crispy and could have done with some sort of homemade sauce rather than school cafeteria Heinz sachets on offer.

If someone would have told us that after the 2014 performance of the Charles Bradlaugh, we would be awarding the pub four stars 12 months on, we would have questioned their honesty and sanity. Yet a year on and here we are, awarding a well deserved four stars for ‘The Gentlemen’ burger. Had it not had been for the only hiccup of a need for a more impactful sweet relish, there is a very strong chance that an extra star may have appeared above.

Important gent tip: All food in the Charles Bradlaugh is half price on a Tuesday as well, making this burger incredible value for money at just £4.25 and arguably the best burger for it’s price anywhere in Northampton on a Tuesday.