The first burger to undergo our rigorous burger search was the Smoke Pit. For those of you who are not aware of The Smoke Pit and what they do, (where have you been?) we will give you a quick recap and point you to our comprehensive restaurant review.

Opening up early in 2015, the Smoke Pit is a haven for gents fond of big flavour and lots of meat. Nestled at 11a The Ridings in the heart of the town centre, the Smoke Pit offers a plethora of different meats served in delicious sauces and glorious sides, such as their mac and cheese and sweet potato fries. With their incredibly large grill and heavy duty smoker, the restaurant focuses on creating authentic American flavour with honest, high quality British ingredients.

Whilst the menu is laden with dishes that the Northampton Gent team would be happy to sink our teeth into, we had to remain focused. We had a job to do, and it involved burgers. The burger menu at the Smoke Pit offers a diverse range of interesting burgers, such as the #CowPigChicken burger and the Chicken Jerk burger which caught our eye. We felt however that we had to take on the finest the Smoke Pit had to offer – the mammoth ‘45 Day Aged Burger Platter’ (£17.50). Consisting of their 45 day aged beef burger topped with crispy bacon, Roquefort cheese and crispy onion rings smothered in burger sauce, a generous helping of pulled smoked brisket, chilli chicken wings, an assortment of pickled veg and a choice of any side, such a meal is truly not for the faint hearted. 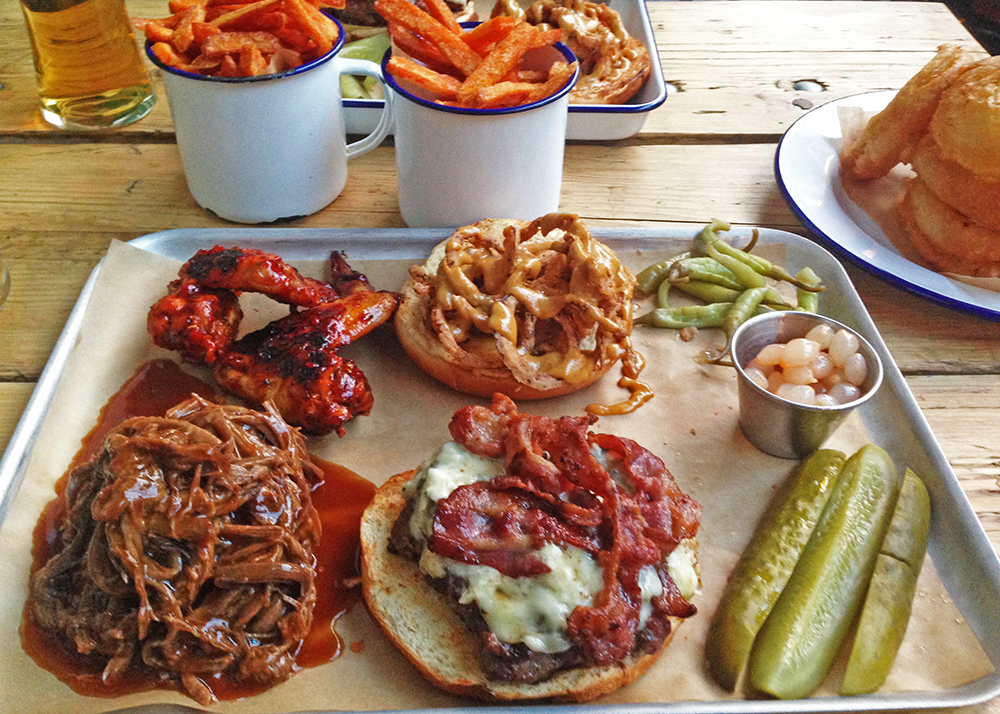 The price may seem steep at a first glance, but the sheer volume of food means it must be viewed more as a 3 course meal served at once rather than a single dish. So did the Smoke Pit and their giant burger platter manage to secure 5 stars right off the bat?

To start with, we must talk about the crux of the platter – the burger. The 45 day aged beef was soft, succulent and juicy without being greasy. Cooked to a medium, the extra aging helped create a more intense beef flavour and a more tender texture which was delightful. The bacon and thin onion rings were both marvellously crispy, adding the crunch needed to accompany the tender burger and light, fluffy bread. The burger sauce added a delicious dimension to the burger and we also added some of the delectable smoked pulled brisket, with its very sweet, smoky and sticky barbeque sauce. The brisket, beef, bacon and onion rings combined with the sauces made for a rather rich affair, so the acidity of the pickled veg helped cut decisively through the richness and helped balance the burger out. The result was a marriage of mouth-watering flavours that led to a delicious burger.

It all seemed to be going swimmingly until we came to the cheese. The Roquefort blue cheese was the proverbial straw that broke the burger’s back. It has to be said, our wonderful waitress gave us fair warning of the intensity of the Roquefort but we decided to take on the platter in all of its glory and see how the cheese would work. Unfortunately, the rich, creamy blue cheese proved to be too strong a flavour for the palette, overpowering the sweetness of the barbeque sauces and the subtle beef flavour of the meat. After we removed the blue cheese from the equation however, we were back to a formidable burger.

We must give honourable mention to the chilli chicken wings which were spicy, tangy and unbelievably moreish – had this been a competition for Northampton’s best chicken wings, these certainly would have received a 5 star. The crispy and salty sweet potato fries were tasty and addictive; exactly what we would hope for from sweet potato fries.

Flavour! There was no shortage of it and is something we expected from the Smoke Pit who specialises in everything rich, deep, sweet and smoky. The platter itself is a feast fit for a king, let alone a gent, with a good balance of different meats and sides such as the wings and fries to more than warrant the price.  The pulled brisket was delectable and the bacon and wings each brought a new dimension to the dish. The burger had some much going right that the coveted 5 stars was a hairbreadth away, but the blue cheese was just too powerful a flavour to work with the beef, bacon, onion rings and sauce.

An extremely well deserved four stars teetering so close to five stars it is painful – without the blue cheese, all we can say is things may very well have ended differently.