The Smoke Pit: A Meat Haven

For those gents that have followed us on our search for Northampton’s best burger, it will come as no surprise when we say we like our meat. So when we first heard about the Smoke Pit back in later months of 2014, we have been waiting in giddy anticipation for the day the doors opened. Well, the wait is over and we have not been left disappointed. Located at 11a The Ridings in the heart of the town centre, the Smoke Pit is the baby of three gents; Jay Miller, James Ingram and Matthew Ingram. The trio have aimed to create a haven for any lover of meat, which is succinctly encapsulated in their hashtag #cowpigchicken. With possibly the largest grill in Northampton and their incredible smoker, The Smoke Pit focuses on injecting incredible and authentic American flavour into great British ingredients. So think steak, brisket, pulled pork, pork ribs, chicken and more.

For weeks we had walked by, eagerly peaking inside and awaiting the day when we could sit down and tuck in. Well that day arrived on 23th of January as the Smoke Pit celebrated their launch and we now have the pleasure of letting you know everything you need to know about the new smokehouse.

With the three gents working with a great team of builders, friends and family, they have renovated and transformed the Old Bake House into a truly unique restaurant. The style could be called Industrial Chic, blending heavy duty materials with stylish features to create a contemporary and modern space that would not look out of place in some of London’s hippest areas.

What makes the Smoke Pit special is the attention paid to each and every aspect of the restaurant. They say ‘God is in the Detail’ and that particularly rings true here. From custom built, heavy duty panels turned into tables; door handles made to resemble meat cleavers; some rather ironic men’s toilet facilities and a plethora of other quirks that will leave you smiling, the interior of the restaurant is a homage to the guys creativity and attention to detail. The Smoke Pit also had custom graffiti commissioned from a local Northampton artist, Pendz. The colourful graffiti instils a youthful, almost rebellious feel to the interior and considering everything that the Smoke Pit is doing seems to stand at odds to what other restaurants are doing in Northampton, this style seems quite appropriate. Impressively, the team managed to keep the character of the building whilst imparting their own distinctive style, keeping original features of the Old Bake House such as the large baker’s ovens in the dining room.

Each well thought out aspect of the restaurant seems to be focused on enhancing the experience for diners. Perhaps the most impressive feature introduced is the flat screen television that constantly shows diners a full view of the kitchen; essentially turning the dining room into one giant chefs table. Being willing to bear all to their customers about what is constantly happening behind the scenes displays a high level of confidence the restaurant has in the kitchen and it is this type of transparency which sets the Smoke Pit apart. 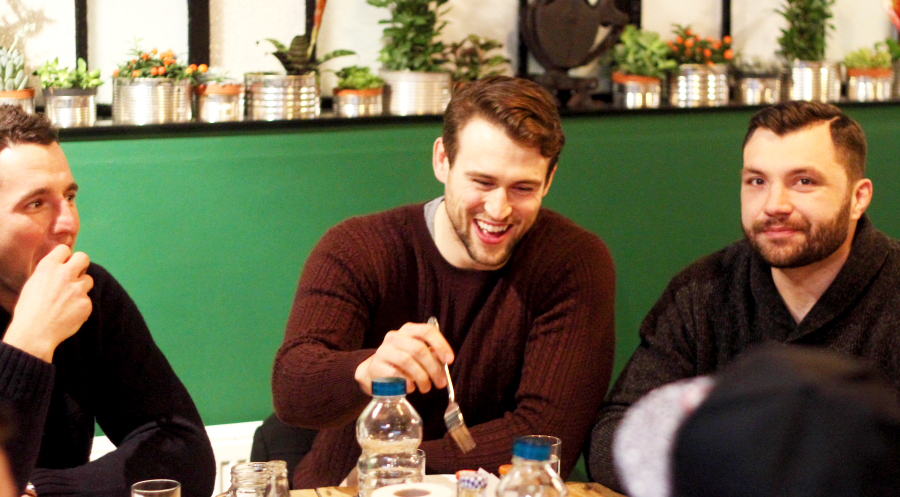 Speaking to James, he made it clear that they did not want the restaurant to be a quiet, stuffy or formal but rather the aim was to create a relaxed and chilled environment where people could enjoy spending time with friends and family. As we sat and ate, the room had a buzz of excitement in the air. The commodores played in the background – of course, not live – whilst fellow patrons sat talking, laughing and snapping pics of their food. It made for a pleasant dining experience.

Having a great looking restaurant is all well and good, but if the food is below par then it matter very little. Fortunately the team have employed that same attention to detail to the food and have focused on creating balanced dishes full of flavour. Brothers’ James and Matthew make up two thirds of the Smoke Pit trio and are the go to guys in the kitchen, both bringing years of experience working in restaurant kitchens and in the catering industry with them. Having spent some time indulging in American cuisine in Florida, the two came back intent on bringing a little slice of the USA to Northampton. 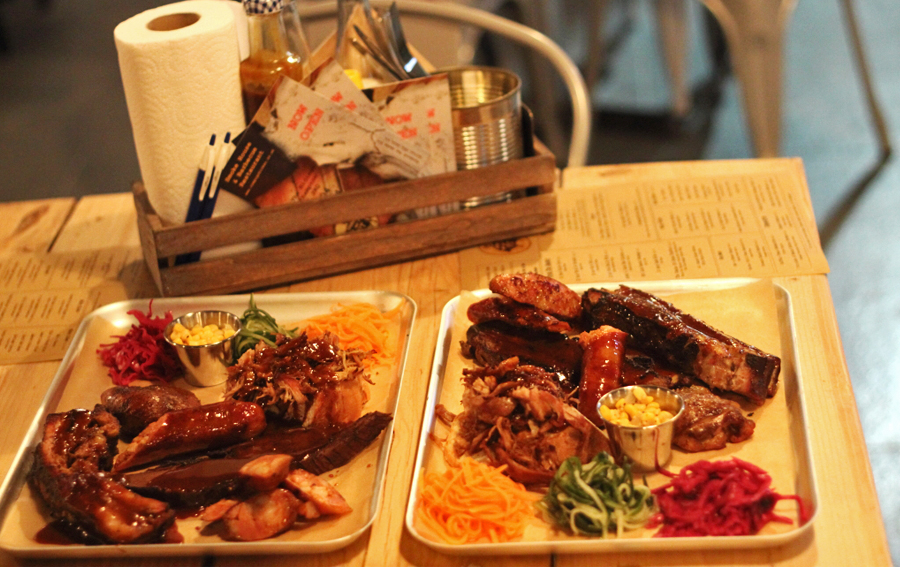 With their giant grill and authentic smoker, the two gents blend American styles and techniques with quintessentially British ingredients. They use Hereford beef, Oxford charcoal in their grill and even source different British woods to experiment with in their smoker. The smoked meat is left to cook slowly for anywhere between 10 to 18 hours, making it wonderfully soft and tender  whilst infused a with deep, smoky flavour.

A word to the wise; this is not a restaurant for the calorie counters out there. Like us, it is better to leave your guilt behind at the door and embrace the food fully. We enjoyed the Smoke Pit House Platter (£21.50), a combination of 15 hour smoked Thick Cut Brisket, 15 hour smoked Pulled Pork, 12 hour smoked Pork Belly Rib, a hot link Sausage and Chicken Thigh, served with pickled carrot, cucumber, beetroot, with Sweet Potato Fries and Mac n Cheese to accompany (£3.00 each). The platter gives a good, broad selection of the different smoke meats available, making it an ideal sharing dish for two who want to give each meat a try – we attempted a platter each but after a valiant effort were overwhelmed.

Each meat had its own distinct flavour and taste, showing the amount of difference the time in the smoker has on the flavours. The sausage was deliciously salty and spicy whilst the brisket had a deep, smoky flavour which was enhanced by the rich barbecue sauce slathered on top. Importantly, the the sauce managed to enhance the flavour of beef without overpowering it, something that can happen all too easily with heavy barbecue sauce. The real stand outs from the platter however had to be the pulled pork and the pork belly rib. The remarkably tender meat on the rib fell off the bone as we pulled at it, with the tangy sauce making it an absolute triumph. The pulled pork was a sweet, sticky treat and the charred bread added a needed crunchy texture. Due to the amount of meat on the platter, it could become a bit rich, especially with such deep flavours of the smoke and the barbecue. Fortunately, the pickled salad cut through all the heavy flavour and was extremely refreshing, balancing the entire meal. With the well seasoned sweet potato fries and the Mac n Cheese with a crumble on top as the cherry on top, the meal can only be described as outstanding.

Maintaining the American inspired theme throughout, the Smoke Pit has an interesting and diverse range of bourbons on offer. Two of our favourites were behind the bar; Buffalo Trace and Elijah Craig. There are 4 beers on tap; a Cornish Pilsner, Blue Moon, their own Pale Ale and Coors Light – unfortunately we will have to disassociate ourselves with any gent that opts for the Coors. Having tried the Smoke Pit’s Pale Ale, we were taken back by the strong pack of flavour. Hoppy with some very distinct fruity notes, we were unsure if the beer might be too heavy with the meal. Despite its rather dark appearance, the pale ale was lighter than we first anticipated and worked well with the meaty meal. As well as the beer on tap, the fridge holds an interesting selection of bottled beer and cider, including Brewdog’s Dead Pony Club.  The Smoke Pit also has a good range of wine, including a range of reds to accompany the beef and a small cocktail selection served in the jam jars. 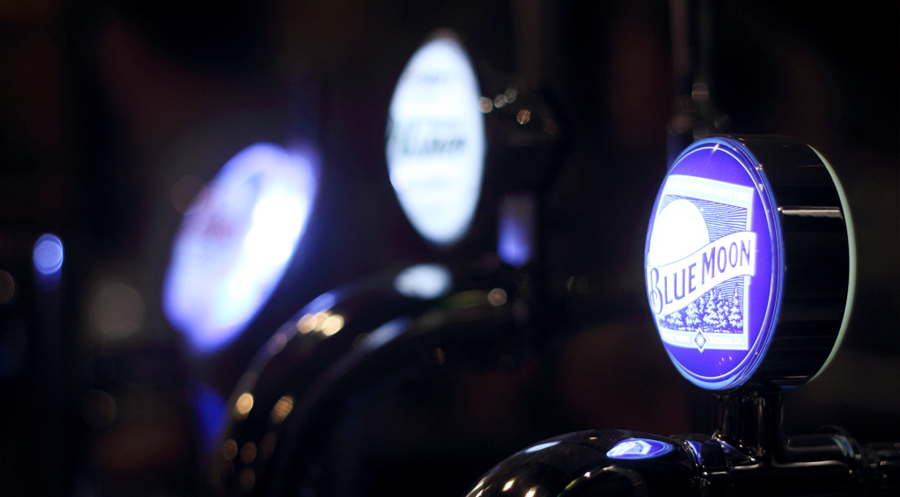 At the front of the restaurant is the relaxed lounge area, filled with big leather chairs where those who want to simply enjoy a drink can relax and some popcorn to nibble on. This may add a new and interesting dimension to the Northampton nightlife options, with the Smoke Pit giving another location for gents to enjoy a casual drink on a Friday and Saturday night without having to venture to some of the less reputable establishments in the town centre.

We could sit and continue writing long into the night about the Smoke Pit, simply because it is one of the most exciting restaurants we have seen open in Northampton since we starting writing about the hidden gems in the town. But if we gave it all away, it would take away that satisfying feeling of discovery you get as you check around the restaurant and pick out little features. All we can say is that we have been waiting for a restaurant that is willing to take the risk of bringing something new and after visiting it quickly becomes apparent that the restaurant is a testament to the three guys’ ambition to create something daring, unique and exciting. This may not be your dream come true if you are a vegetarian; however for the carnivorous gent amongst us, the Smoke Pit is enough to turn even the most refined gentleman into a meat crazed troglodyte.

« 3 Key Style Trends for Men this Spring/Summer 2015
The Gent’s Song of the Week: Birds of Prey »