The search for the mother of all burgers continues as we frequent the speakeasy themed bar that is Bootleggers.

Bootleggers, a 1920s inspired liquor bar on Wellingborough road serves a range of American dishes, craft beers from across the globe (we strongly suggest you try the magnificent Australian ‘Little Creatures pale ale’) and cocktails. The liquor selection at Bootleggers was impressive however we are gentlemen on a mission and strictly focused on the burger business at hand. After some deep and considered thought about which burger to choose, the Al Capone won out. When a burger is named after one of the most infamous mobsters ever to have lived, we expected something rather special and equally dangerous. With two 6oz patties and a host of toppings, the burger is as much larger than life as the man after which it is named. 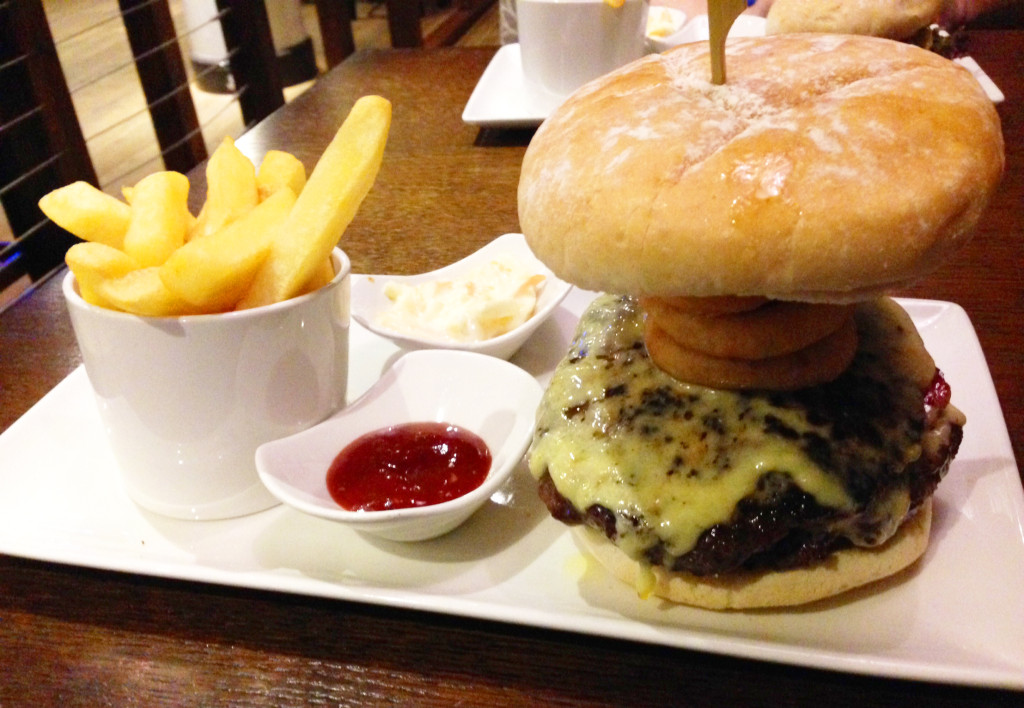 A great burger, like a great crime, ensures each element works together flawlessly. Any weak links and the whole thing can unravel. Unfortunately if the Al Capone was a criminal team, it would be less Ocean’s 11 and more akin to the blundering hijinks of the Ladykillers.

Let us start by saying this; you get a lot of bang for your buck. Visiting on a Monday sees Bootleggers offering 50% off all food, so this 12oz gargantuan is only £5.25. There is certainly value however we at the Northampton Gent are firm believers in quality over quantity.

So as is with any burger, our primary concern was the beef. The two 6oz patties meant there was a lot of meat to consume however there was also a considerable amount of grease to contend with, which unfortunately drowned out some of the flavours of the seasoned beef. It seems that it was all too much for the rather bland and unassuming bun to handle which became grease soaked and lost any of the structural integrity it might have been able to offer.

Like any poorly constructed crime, the whole affair became rather messy.

The salsa was regrettably bland, failing to bring any tangy or spicy qualities you would expect from a good salsa. The strong cheddar cheese injected a strong, pleasurable dose of flavour to what otherwise would have become a rather non-descript experience however overpowered the other elements of the burger. The onion ring tower housed the sautéed mushrooms however the stacked rings made the burger unmanageable, requiring some reconstruction whilst the grease turned the onion rings soggy. The sautéed mushrooms offered a hint of a rich, savoury flavour but struggled to make its presence known over the cheese and bacon. The saltiness of the bacon was a nice addition but was limp, undercooked and chewy. Buried beneath this plethora of toppings was one single, grease soaked lettuce leaf doing its best Jimmy Hoffa impression.

One of the biggest shocks was the broken promise of ‘shoe string fries’ on the menu. Instead served were big chips that seemed to closely resemble a well known oven chip brand. We knew mobsters were dishonest but never imagined the Al Capone would take it quite so literally.

Overall the Al Capone left a lot to be desired. The grease from the patties impacted on the rest of the burger whilst the myriad of toppings failed to work together. At its Monday price the Al Capone would score a low three stars with the value factor playing a substantial part (you will be hard pushed to find elsewhere that will serve up so much for so little). At the burger’s full price however, it would be criminal to give it anything over two stars.