So our journey of burger discovery continues as we ventured to the Picturedrome to discover if they had what it takes to turn a refined gentleman into meat crazed carnivore. Did they have the burger that could claim the coveted 5 stars that had eluded so many others? Before we dive into the meat however, a little bit about the unique bar that is Picturedrome.

The Picturedrome has an interesting backstory, with it being Northampton’s first purpose-built cinema in 1912 before being restored and converted into one of town’s finer bars. In keeping with its original purpose of offering entertainment to patrons, the Picturedrome is now one of the best places in Northampton to enjoy live music from both up and coming artists and well known performers. The bar also runs various events including a Monday film night, a live comedy night every first Tuesday of every month and plenty more. This article however is not to discuss the ins and outs of the Picturedrome; this is coming in another article. No, we came here not in search of films, music or laughs. We came in search of that beautiful and gastronomic delight that is known as the burger. 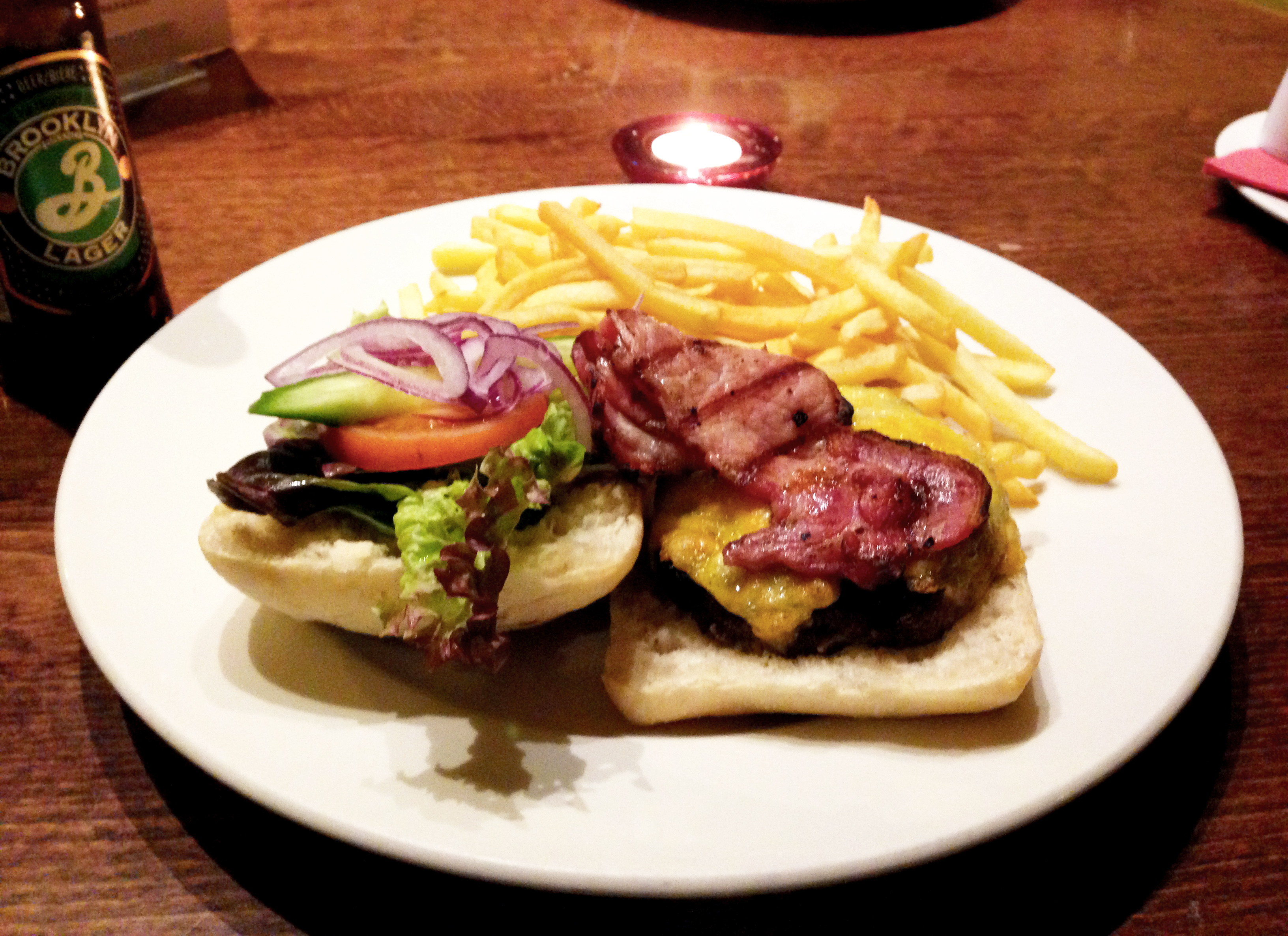 Well, would the ex-filmhouse be able to produce a box-office smash or a flop (yes, we are going to use this movie theme throughout the review, brace yourself cinema-centric references and puns). Well, any great burger, like any great film, needs a star. Someone to steal the show. In this case, the star of the handmade burger was decisively the patty. The rich and beefy flavour of the meat shone through, letting us know that this was no Z list piece of beef.  The Picturedrome create their patty on-site and it was seasoned to perfection. The chunky texture was cooked superbly and after taking our first bite, we could see a faint tinge of pink. The burger was incredibly juicy without falling into the dangerous depths of horribly greasy which is by no means an easy feat. The supporting role of the bun was played incredible well by the rustic bread. The ciabatta-esque square roll was satisfyingly crusty on the outside whilst being soft on the inside and managing to enhance the succulent patty, retaining its shape when faced with the patty’s juices.

So we have a brilliant lead and supporting actor, but what about the rest of movie? Alone, a patty and bread cannot make an awe inspiring burger as much as two good actors cannot make a great film. Sure we have John Travolta and Samuel L Jackson, but that does not mean we have Pulp Fiction. The toppings needed to all work in unison to tie the whole thing together, the same way that the plot of a film will unleash the performers’ potentials. The cheese, bacon and salad all work well collectively, creating an excellently balanced burger. For the extra £1.60 (80p each for bacon and cheese) we would certainly recommend indulging in both the cheese and bacon. The bacon was wonderfully crispy, injecting a salty flavour that worked well with seasoned beef rather than fighting it. Combined with the fresh salad and melted cheddar cheese atop the patty with its soft texture and mellow taste meant the handmade burger was close to becoming a box office hit.

But alas, with its strong plot and all star cast, there were some aspects that let it down. The first were the fries. Limp and anaemic. What should have played the extras of this flick, subtly acting in the background and enhancing the leading roles, instead made their presence disappointedly known and distracted from what should have been classic. Our second gripe has to be the sauce. As we sat in the relaxed and stylish bar, we were presented with small sachets of Heinz sauce to accompany of handmade burger, transporting us violently back into our secondary school canteen. To this day, we cannot believe that the handmade burger, with its flavoursome patty, delightful bread and combination of delicious toppings, was given such a lacklustre sauce. Sure, there were a lot of sachet options. Mustard, ketchup, salad cream; all the Heinz delights one could desire, but it added a sense of thoughtlessness to an otherwise well constructed and well thought out burger. An incredible plot filled with superstars and let down by below par extras and a cheap film set.

So how did the Picturedrome’s handmade burger perform? Well the burger was perfectly balanced, with the toppings and patty cooked flawlessly with the right amounts to stop it from becoming unmanageable. Almost every aspect was considered; unfortunately the fries and sachet sauce let it down. The fries could have been overlooked; similarly to how one Stormtooper hitting his head on a door in Episode 4 does not detract from the quality of Star Wars. The sauce on the other hand was a deal breaker. So the handmade burger wins a highly respectable 4 stars. And who knows, perhaps a digitally remastered version of the handmade burger will be released with homemade sauce to propel it into the 5 star territory.