A Most Regal Affair at the Haycock and Tailbar

On a warmer night than what we expect in September, the Haycock & Tailbar hosted another of their exclusive cocktail nights. The third one the Northampton Gent has had the pleasure of being involved in, these are becoming quite the highlight on the calendar. For those of you who were enviously catching the Northampton Gent’s live tweets of the event, you are fairly well clued up on the proceedings. For those of you however that did not get to see the wonders of the evening, allow us to regale you with tales of cocktails, fire and amazement.

This September, winners of the Northampton Gent competition were treated to a taste of the new, limited edition of the Warner Edwards’ regal Rhubarb gin. Now if you are reading this wondering what in the world is ‘regal Rhubarb gin’. Well, we can spend a good portion of this article going into detail of the wonderful, pink liquor or we can simply direct you to this Warner Edwards’ Regal Rhubarb Gin article we wrote earlier. This gives us more time to focus on what is important, the gin experience.

The lucky winners descended into the dimly lit bar where they were greeted by the sight of the distinctive penny stamp inspired bottle of the regal gin and the sound of soft jazz playing. As everyone took their seats and acclimatised to their surroundings, the night began with a brief introduction from the Edwards in ‘Warner Edwards’, Sion Edwards about Warner Edwards and where their latest iteration of gin originated from. As Sion explained the ins and outs of this gin’s noble roots, attendees were provided with a small amount of gin to taste. The wonderful spirit had the same smoothness as the rest of the Warner Edwards range, but was also very sweet with a powerful taste of rhurbarb.

The first cocktail of the night was an English Garden. Made with the Warner Edwards rhubarb gin, raspberries & cucumber and lemon juice, the mixologists at Haycock and Tailbar offset the sweetness of the gin by using lots of lemon. The cocktails connoisseurs considered every element of the drink, adding the cucumber to add a light taste and purposely leaving on the skin too add a slight bitter taste to increase the complexity of the palette and flavours. After a few sips, we were in love with it. Extremely refreshing, the drink felt like we were drinking summer in September.

The second cocktail of the night was the Rhubarb and Vanilla Old Fashioned. Haycock & Tailbar are renowned for their Old Fashioneds – something we can personally attest to – so we were excited to see how they used the Rhubarb gin to create this rather original version of a classic cocktail. Due to the nature of the sweeter than average gin, the Old Fashioned had a distinctly sweet taste as the rhubarb flavour shot through. The rhubarb gin made for a very smooth drink and the flavour was reminiscent of rhubarb and custard. For those of you intrigued as to why they are setting alight to the drinks, the masterminds at Haycock & Tailbar decided to burn a vanilla pod with the Old Fashioned, emitting a delectable aroma of vanilla to indulge all senses. It would be an understatement to say that these guys do not operate in half measures – a slight pun intended. 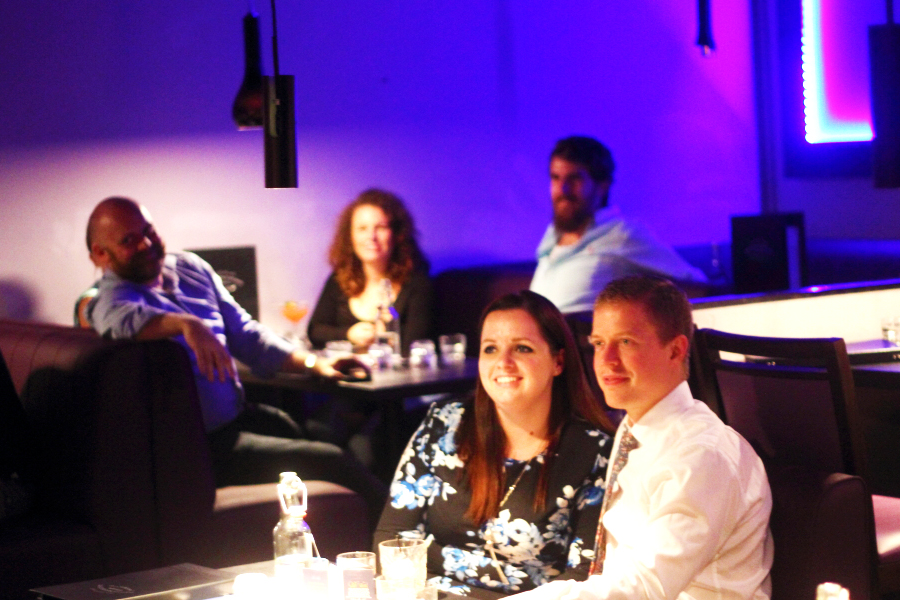 Another month, another spirit, another incredible night. Warner Edwards are known for their exquisite gin and the Haycock & Tailbar are known for having the skills to use that gin to create beautiful cocktails, so the two were a match made in heaven. The regal Rhubarb gin is delicious and goes down worryingly easy and thanks to the guys at the Haycock & Tailbar, we know it works extremely well in cocktails.

Are you ready for the next one…

A big thank you to everyone who came and enjoyed the night, also to the fine gents at Warner Edwards and of course those delightful fellows at Haycock and Tailbar. If you are reading this and thinking, ‘how do I go about getting one of those golden tickets to attend these rather marvellous evenings?’, well it is all quite simple our dear sir. Enter the competition. And you are in luck, for we just happen to be running our next competition for the highly anticipated ‘Tequila Night’ this October with Herradura tequila and Haycock & Tailbar! Enter today and we hope to see you at our next event soon.